How to Understand a DataRobot Model: Understanding Why a Prediction Has Its Value [Part 8]

A recently published research paper from Columbia University described a common dilemma in machine learning. Back in the mid-1990s, one cost-effective healthcare initiative investigated the application of machine learning to predict the probability of death for patients with pneumonia so that high-risk patients could be admitted to the hospital while low-risk patients were treated as outpatients. This had the potential to simultaneously improve health outcomes while reducing hospitalization costs. But the most accurate machine learning algorithms were not intelligible. With people’s lives on the line, it was decided that the risk of black-box models was not acceptable, and they selected a less accurate rule-based algorithm that was more intelligible. 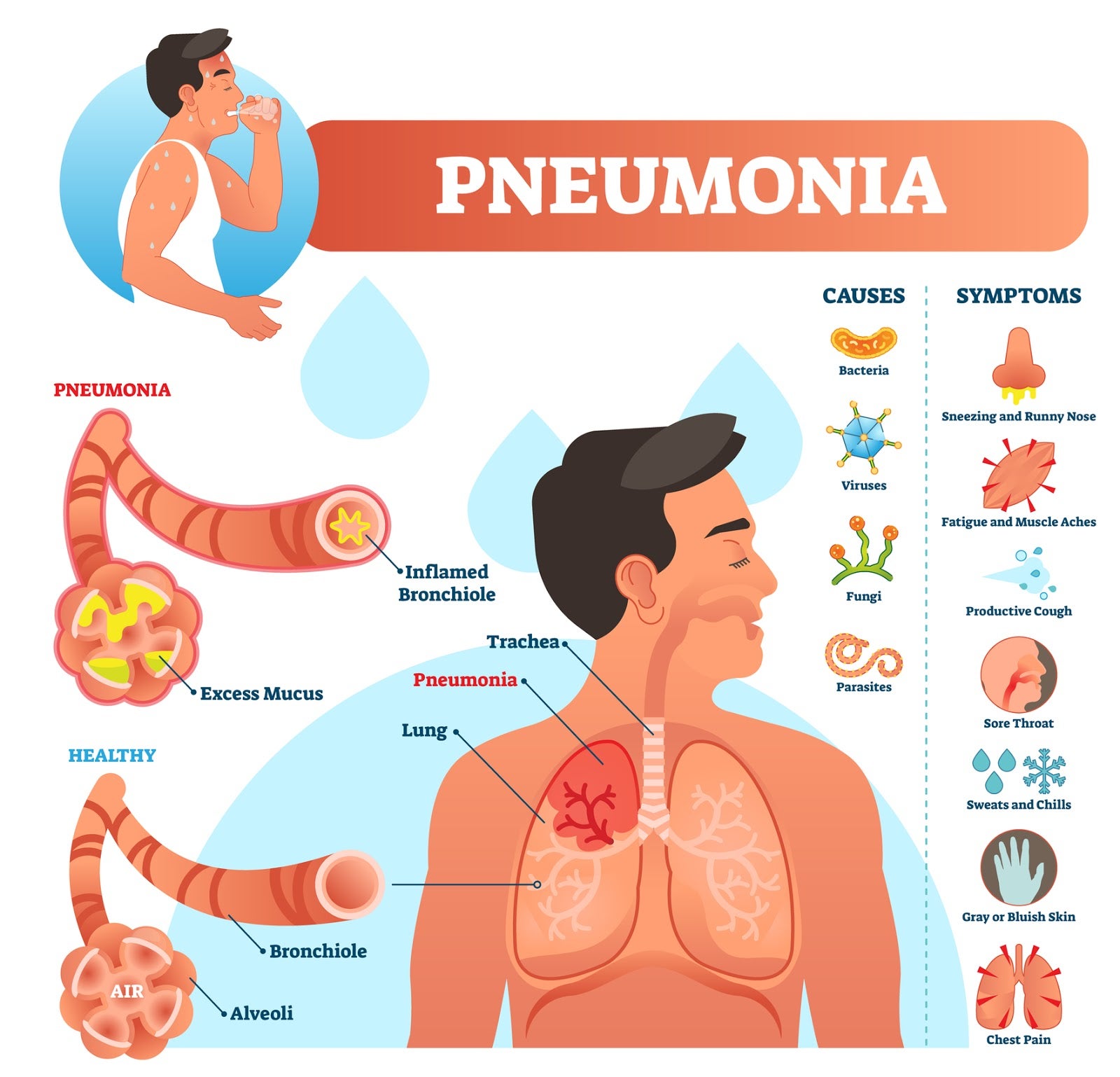 This choice of algorithm was vindicated when they discovered something strange. The rule-based algorithm learned the rule that patients with pneumonia who have a history of asthma have a lower risk of dying from pneumonia than the general population. This was counterintuitive with studies showing asthmatics having a high mortality risk from pneumonia. Further investigation showed that upon admission to a hospital, asthmatics suffering from pneumonia were often sent directly to the Intensive Care Unit and given the extra effective care that they needed, with consequently improved outcomes. If they had used the more accurate, but unintelligible, algorithms they may have inadvertently put asthmatics lives at risk by assessing them as low risk and sending them home.

While your organization may not make life-or-death decisions, the consequences of using unintelligible black-box models could still be serious. Think of the reputation damage from applying unfair recruitment algorithms, thousands left without electricity when a power grid fails, losses from lending money to bad risks, reduced sales from mis-selling products to customers, or unclean water discharged into a river after a miscalculation in a water treatment plant. 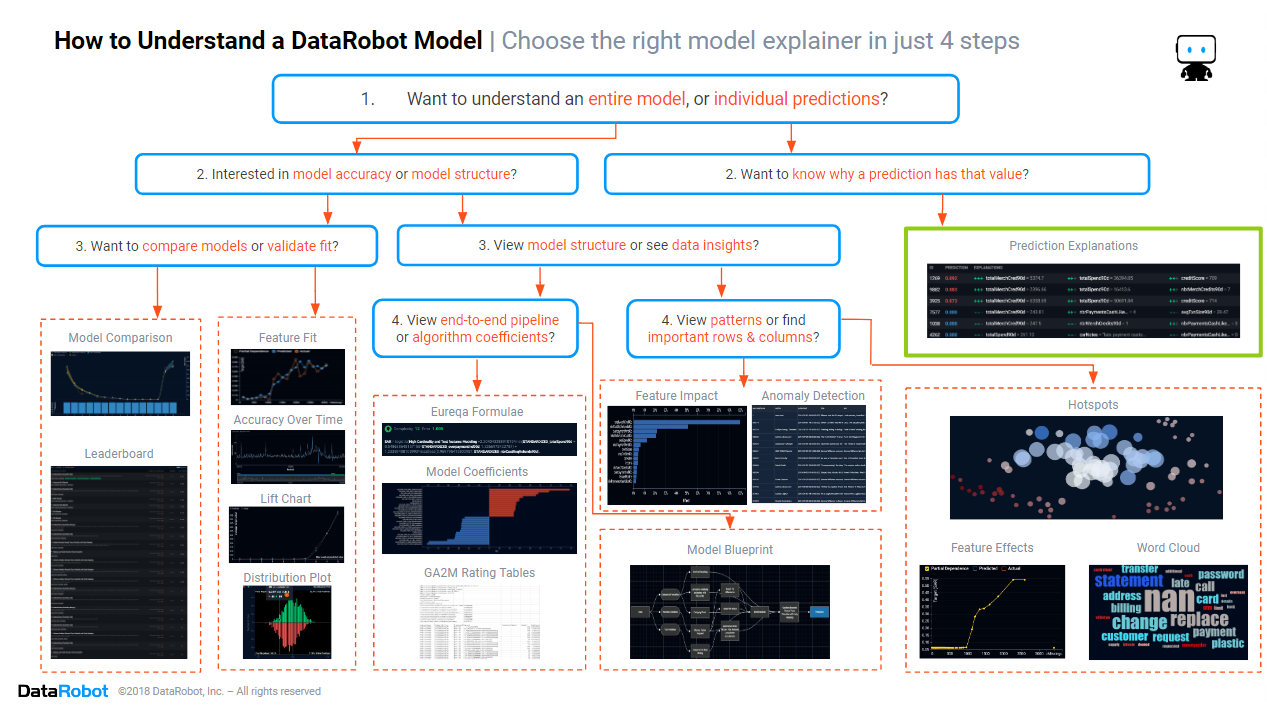 In the previous blogs from this series, we focused on understanding how a model works. We found how to assess the model accuracy, which columns and rows are important in the data, and how to discover the patterns in the data that the model is using. In this blog, we will switch from understanding the model and instead focus on the section of the cheat sheet marked in green above, discovering how to understand the predicted values that a DataRobot model makes, predictions that power the decisions that your AI makes.

Historically, statisticians built models designed to test a single hypothesis. The conclusion was either that the hypothesis was correct or that the hypothesis was incorrect. This led to simple and clear explanations (e.g., the patient’s health improved because they were treated by a new drug). However, statistical models were more difficult to interpret in multivariate analysis, when models simultaneously considered the effects of multiple input feature. It became increasingly difficult to apportion a result to multiple inputs. With the introduction of machine learning, interpretability became more difficult as the formulae became more complex, capturing complex effects and interactions between inputs. This led many to despair that machine learning was doomed to be black-box technology and that the only choice was between accuracy versus interpretability.

The modern AI-driven organization does not choose between accuracy and interpretability of predictions. It wants and needs both accuracy and interpretability. Its business staff want actionable insights (e.g., why a specific customer is likely to churn). With the trust and buy-in of those business staff, AIs would not have been accepted within the broader business. Increasing consumer activism and regulatory restrictions mean that organizations must explain algorithmic decisions as they affect their customers. The modern AI-driven organization achieves this by using the latest generation of AI, which explains its decisions in a human-friendly manner, accessible to data scientists and business people alike.

The insights and diagnostics described in this blog series were about the big picture, the model in total. But data analysts want insights into individual customers. Marketers want to align campaign messaging with the reasons why customers were selected for the campaign by an algorithm. Business staff want to see detailed worked examples to check against business rules and common sense. For these purposes and more, DataRobot has prediction explanations. A prediction explanation tells us which input features caused a prediction to have its value. Prediction explanations are best at explaining why a data point has a prediction that is different from a typical prediction by considering two aspects of that data point:

Above is a screenshot of the prediction explanations for a complex algorithm trained on Lending Club’s loan data, used to predict which loans will go bad.

Placing the mouse over a feature value will show a window displaying the full contents of that input feature. In the screenshot above, you can see a loan description text feature that describes how the loan applicant wants to borrow money to fund a new business that films documentaries.

How to Interpret the Prediction Explanations Above:

The path to trusting an AI includes knowing whether the way it is using the data is suitable and reasonable. The path to building an AI involves training multiple machine learning algorithms to find the one that best suits your needs, and the only practical way for you to quickly find the model that is suitable is to use automated machine learning, which generates the prediction explanations for each and every data point, for each and every model. If your AI is a black box that can’t explain the predictions and decisions that it makes, then it’s time to update to DataRobot for AI that you can trust. Click here to arrange for a demonstration of DataRobot’s human-friendly insights, showing how you can trust an AI.