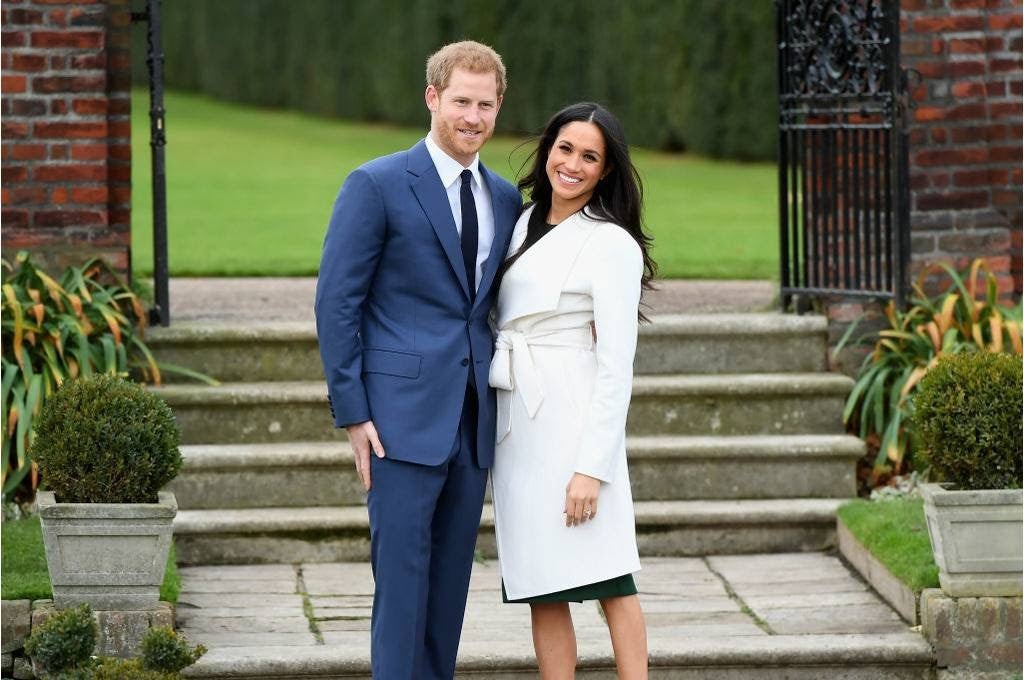 How we applied automated machine learning to predict the future for
Prince Harry and his bride-to-be, Meghan Markle.

On May 19, 2018, a wedding will take place at St. George’s Chapel, Windsor Castle in England to celebrate the marriage between Prince Harry of Wales and Meghan Markle. Every aspect of their wedding has been discussed in microscopic detail since their engagement was announced in November 2017. What will her dress look like? Who is attending the wedding ceremony? Will it be a traditional wedding, or will the couple make their own rules?

Being the romantics that we are, we decided to analyze the data to determine if Prince Harry and Meghan are likely to remain together after the nuptials.

As data scientists, we also have a question about whether or not the royal couple will live “happily ever after.” Being the romantics that we are, we decided to use DataRobot to analyze the data for determining if Prince Harry and Meghan are likely to remain together after the nuptials.

By using data from a Stanford study that follows thousands of couples over a period of more than two years, the team at  DataRobot created a simple algorithm to predict the longevity of relationships. And by answering six questions, anyone can take our quiz to determine the likelihood that their relationship will last at least two more years.

Using the abundance of information about the royal couple available on the Internet, we thought it would be fun to see how Prince Harry and Meghan would fare with our model. Here are the six questions and the information we used for this task: 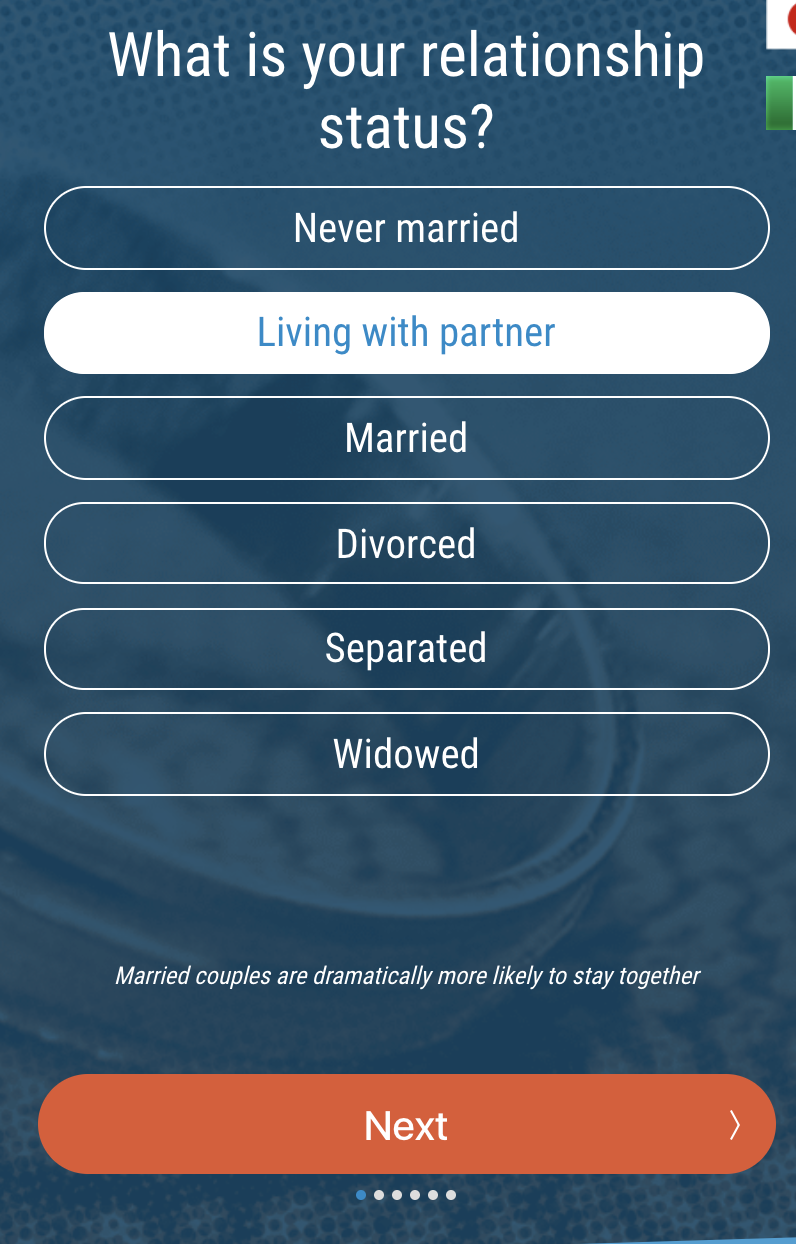 What is your relationship status?

The longer you’ve been romantic, the more likely you are to stay together.

Meghan moved to the UK in November 2017 to live with Prince Harry at his Kensington Palace apartment. How many years have you and your partner been together?

About 2/3 of the Stanford study population is married. Committing to marriage makes relationships last substantially longer.

Harry and Meghan have been dating for roughly two years. Kensington Palace officially referred to Meghan Markle as Prince Harry’s girlfriend for the first time in November 2016, and the couple announced their engagement the following year. 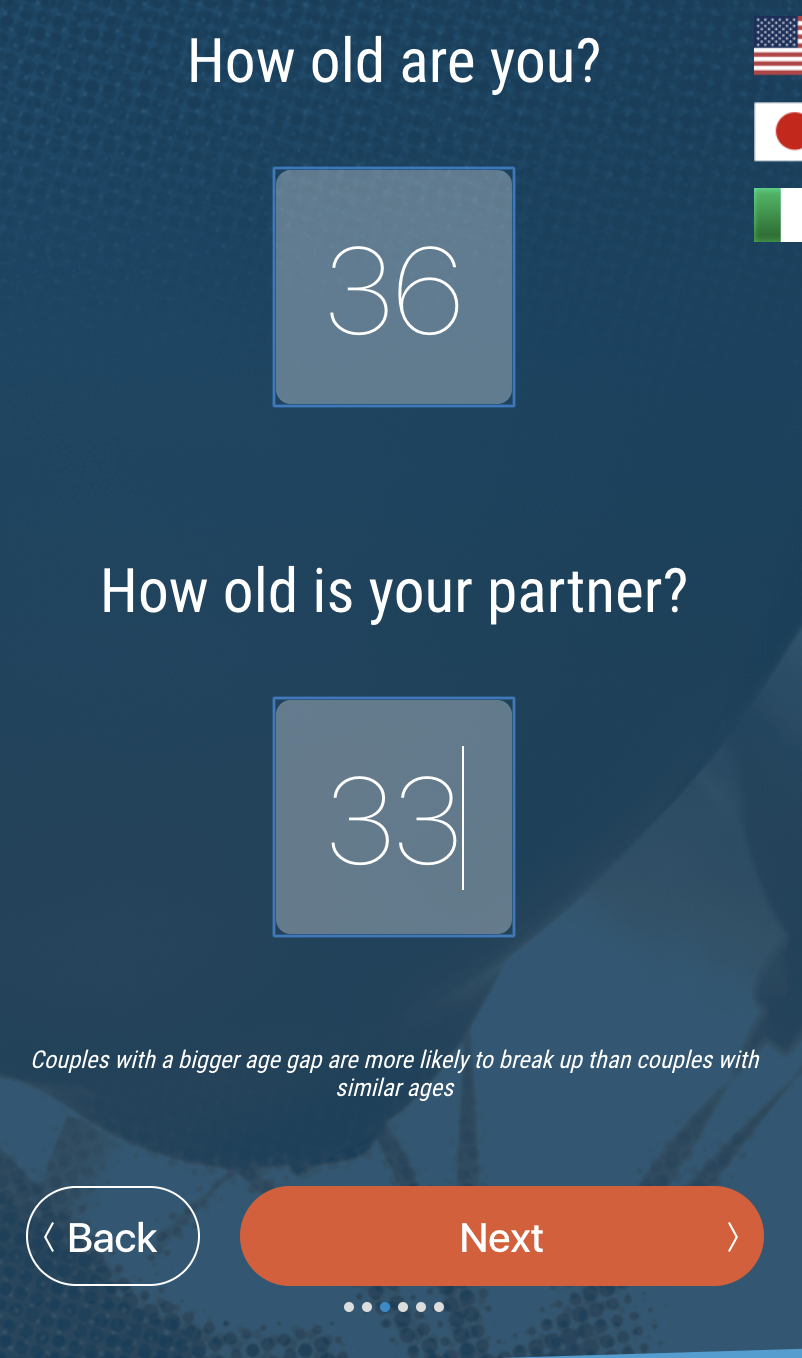 How old are you?

The larger the age gap, the lower the score. This is particularly true if the gap is greater than 10 years. 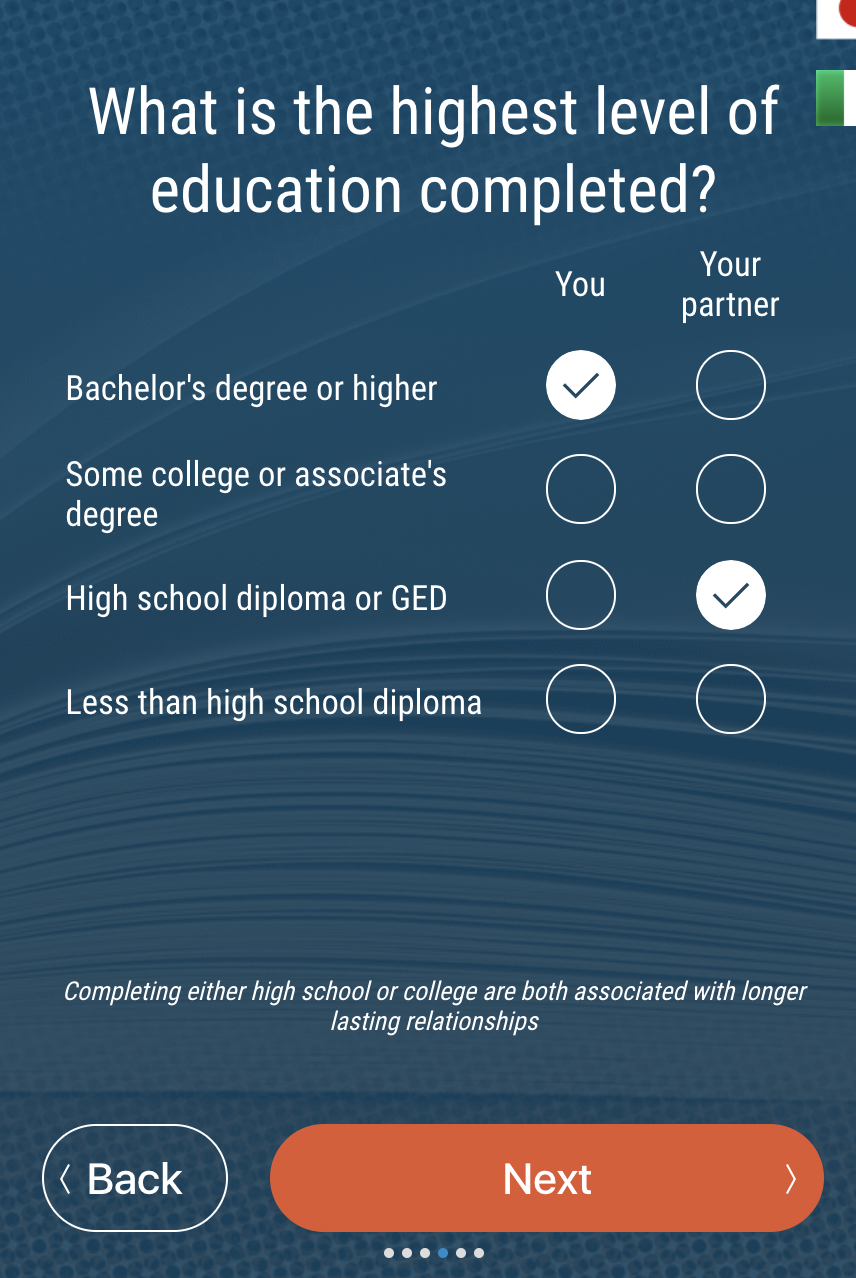 What is the highest level of education completed?

Completing either high school or college are both associated with longer

Meghan attended Northwestern University and graduated with a double major in Theater and International Studies. Prince Harry graduated from  Eton College, where he studied Art and Geography, then attended the Royal Military Academy Sandhurst. 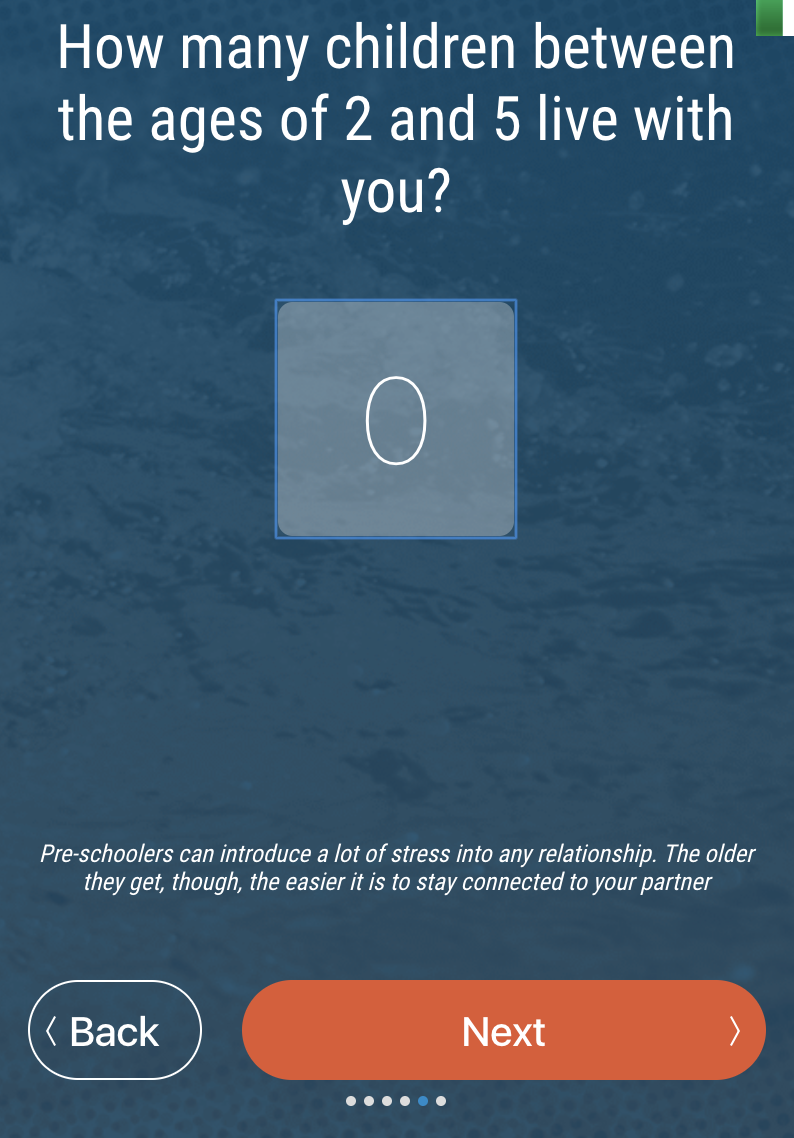 How many children between the ages of 2 and 5 live with you?

We looked at the effect of children of all different ages. Only pre-schoolers had an effect on scores. The more 2 to 5 year olds in a house, the more likely a couple is to break up. Babies and school-aged children don’t have an impact

Neither Meghan or Harry have children. However, there are other tenants at Kensington Palace with children (hint: George, Charlotte, and Louis). 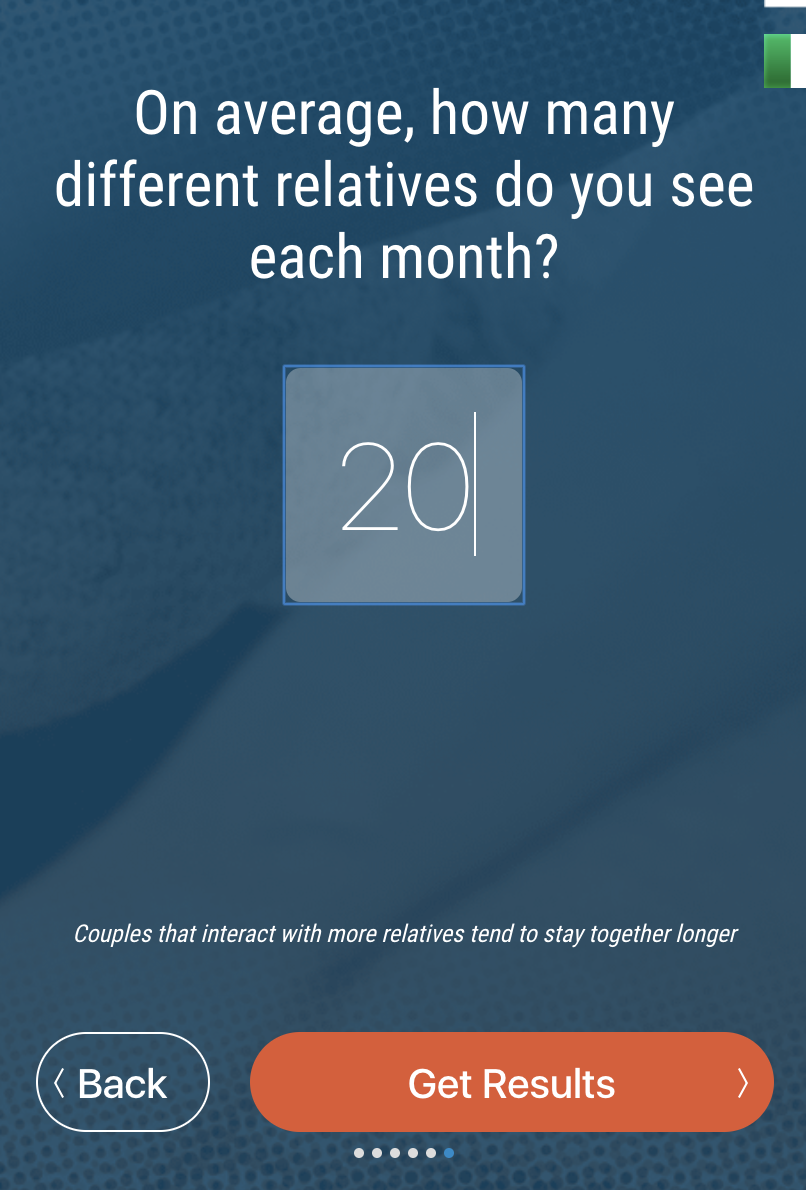 On average, how many different relatives do you see each month?

The bigger your family network is, the longer your relationship is likely to last. This is especially true if you interact with more than 6 additional family members per month.

This is a tricky one to answer as the royal family is large and there are a lot of events they attend together. We researched the living arrangements at Kensington Palace and learned that Harry and Meghan are living in one of six apartments. We estimate that 12 people live at Kensington Palace, and the number of family interactions will be closer to 20 given that Harry and Meghan will most likely see Queen Elizabeth, Prince Philip, Prince Charles, and many others.

And, the result! According to the model, there’s a strong 91.7% likelihood that Prince Harry and Meghan Markle will be together for more than two years! Although this is a light-hearted example of a model (even though the Stanford study uses real-world data), the underlying approach is the same as if a business wanted to predict customer retention, fraud, or market risk. If you’re interested in learning how our AI Services team built the relationship analyzer app, read this blog post about the process, and then take the quiz yourself at labs.datarobot.com/relationships.

And even without a machine learning algorithm, we can predict that Royal Wedding will have the attention of the world! Best of luck to Harry and Meghan.

Just for fun, we reran this model to see how being a married couple would affect their likelihood to remain together. The result is an impressive 97.6%!

Greg Michaelson is the Director of DataRobot Labs, an R&D group focused on developing data science applications in a business context. Prior to that he led the data science practice at DataRobot, working clients across the world to ensure their success using the DataRobot platform to solve their business problems. Prior to joining DataRobot, Greg led modeling teams at Travelers and Regions Financial, focusing on pricing and risk modeling. He earned his Ph.D. in applied statistics from the Culverhouse College of Business Administration at the University of Alabama. Greg lives in Charlotte, NC with his wife and four children and their pet tarantula.