The United States military currently has a huge recruiting problem. According to the latest Heritage report, 71% of Americans ages 17 – 24 cannot qualify for military service due to health problems, physical fitness, education, or criminality. All military branches are struggling to find enough recruits to maintain a fighting force.

Additionally, today’s low unemployment rates are continuing to exacerbate the problem. The graph below illustrates how unemployment is shrinking the recruit pool. 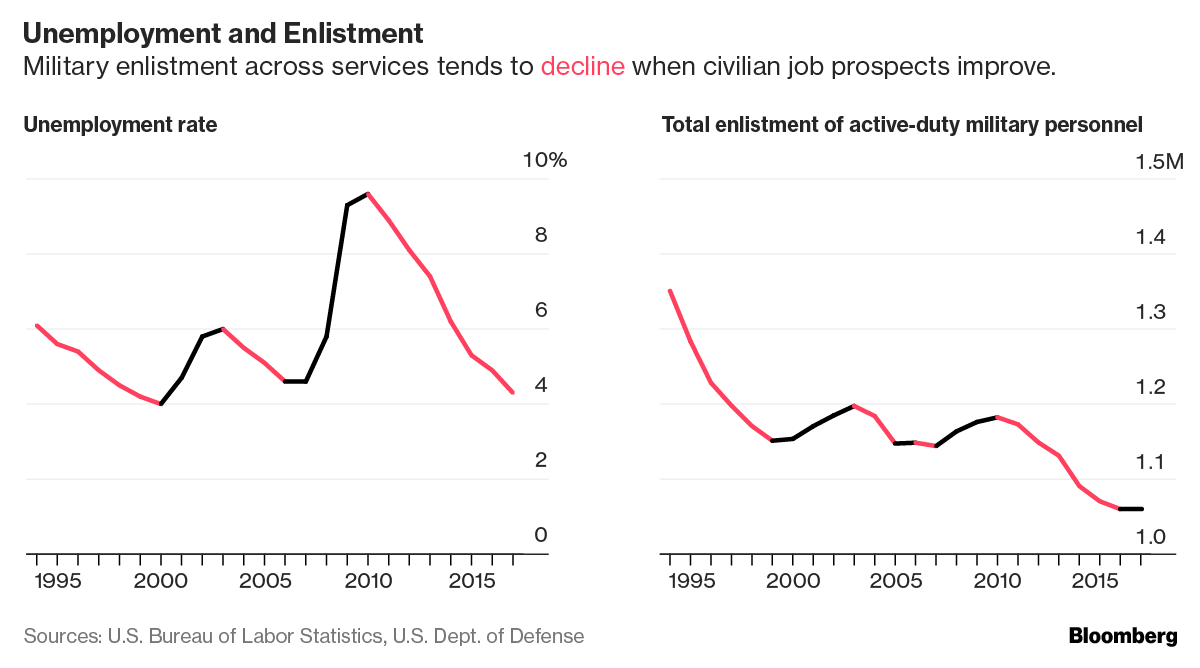 So, why does this matter? If we think about the long-term impact of this recruiting problem, we can see how the security of the nation, as a whole, is at risk. We are essentially  losing the ability to secure the country. And, above all else, we will also lose the ability to prevent war without a well-staffed and formidable military.

To compensate for the shortfalls in recruiting, the Army has begun to acknowledge that they may need to lower their standards and take in more recruits who require waivers for marijuana use, low test scores, and medical problems. This does nothing to prevent the degradation of our forces; if anything, it makes it more difficult to accomplish the mission because the soldiers to your right and left may not be up to the standards of a U.S. soldier, sailor, marine, or airman.

Instead, we need to start looking at the data and develop fact-based solutions to improve the efficiency in the recruitment process using an advanced technology called machine learning.

To create a long-term solution for the military’s recruiting challenges, we need to think strategically. Merely throwing taxpayer money at the problem doesn’t solve the fundamental personnel issues, and with all things government, there needs to be checks and balances in place to ensure problems end in the most economical and ethical manner feasible. Instead, we need to start looking at the data and develop fact-based solutions to improve the efficiency in the recruitment process using an advanced technology called machine learning.

What we are trying to predict from the known outcomes could be one of several things based on the most pressing need. If we are worried that recruits won’t make it through Basic Training, then our outcome could be whether or not the recruit made it through basic training. If we are concerned that eligible recruits will enlist, then our outcome should be whether or not a prospect  enlisted.

For the sake of simplicity, we will say that we are trying to develop a model that will predict whether a potential recruit is likely to enlist. The historical data indicates whether a recruit enlisted in any branch of the service. With machine learning, we have the flexibility to break this problem down by state, a branch of service, and many other subsets of the population to make better predictions. The end result of all this work will be a model that predicts whether or not any individual future prospect will enlist in the military.

Doing nothing about the recruiting issue continues to allow the degradation of our armed services and the security of the country. Let’s look at some numbers.

Maybe you think that there should be more dramatic applications of machine learning and artificial intelligence in the military, but one should take a step back and consider the implications. Doing nothing about the recruiting issue continues to allow the degradation of our armed services and the security of the country. Let us look at some numbers.

The Army’s enlistment goal for 2018 is 80,000 soldiers — 11,500 more than last year’s target. However, they have already acknowledged that this goal is unobtainable. To compensate for the increase in quota, the Army has employed 400 more recruiters, increasing the total of number recruiters to 9,400. Additionally, the military branches are budgeting hundreds of millions of dollars in bonuses for high-demand jobs such as cyber security, intelligence, and more. 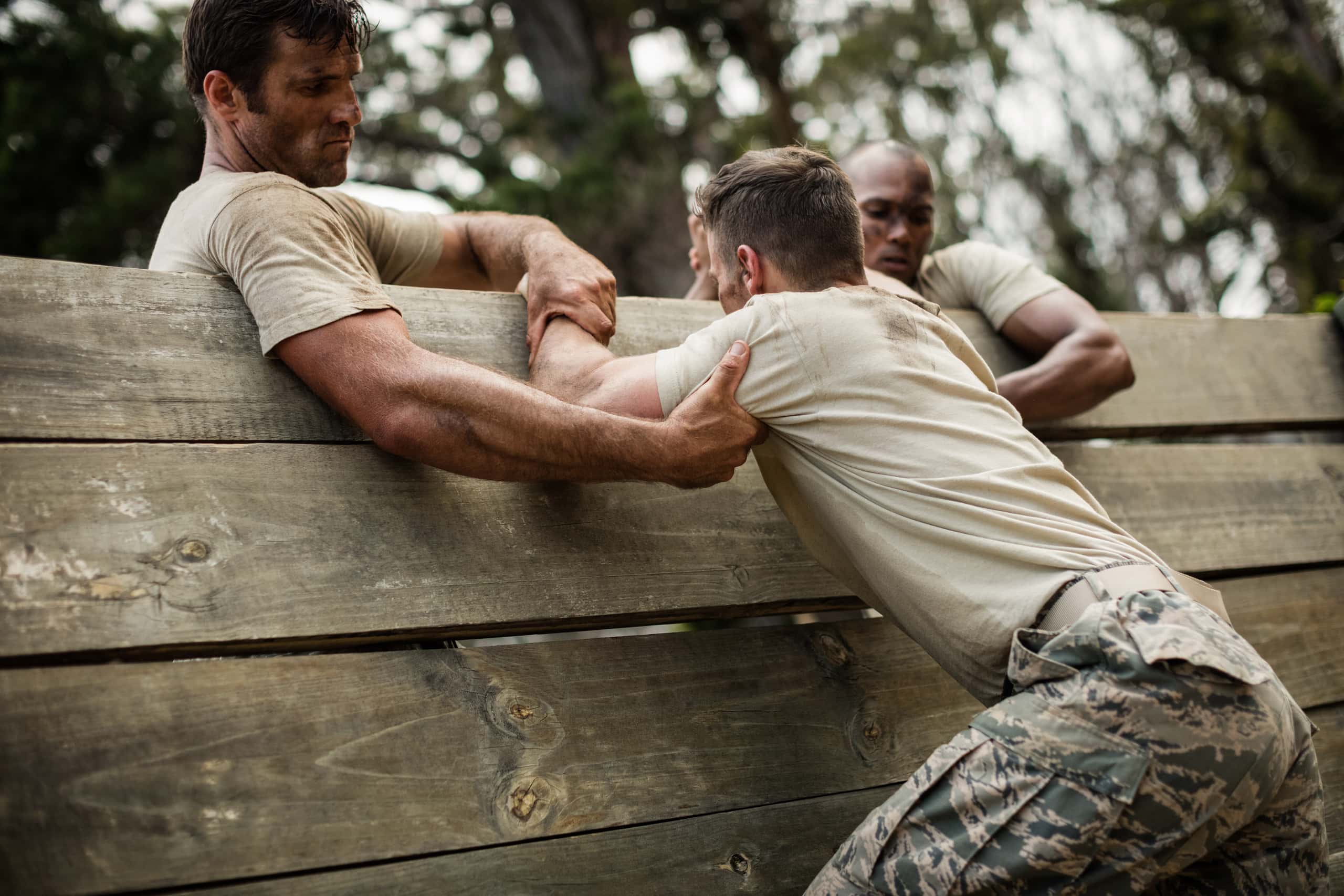 As of April 2018, Army Secretary Mark Esper acknowledged that 4% of the force are considered “Category 4” soldiers — soldiers with low test scores — and the goal is to reduce that number to 2%. If machine learning can provide a 1% lift in recruitment from last year’s numbers without increasing work output from recruiters, that would mean an additional 685 qualified soldiers in 2018 with little additional effort, while also eliminating some of our dependence on “Category 4” soldiers by driving more high-quality recruits. Machine learning provides better insights for those most likely to enlist, giving recruiters the names of potential recruits to focus efforts to reach their objectives.

The Challenges in Military Recruiting

Military recruiters have a tough job. These men and women are entrusted with staffing the armed services with high-quality recruits to ensure the security of the nation. They need all of the help and support they can get. Some recruiters, like Chapel Hill’s Staff Sergeant Miller McGowan, are turning to new methods of engaging potential recruits, including the use of social media platforms like Facebook. However, Staff Sergeant McGowan has to manually comb through his list of prospects, relying on his experience and instinct to guess which recruits are likely to engage with him.

Wouldn’t it be more efficient if Staff Sergeant McGowan was given the names of prospects ranked by their likelihood to enlist, along with the factors that contribute to this increased likelihood based on the data already collected? Utilizing machine learning will help every recruiter better prioritize their time and quickly turn the two recruits they need to enlist per month into three, high-quality recruits able to contribute to the overall defense and security of the nation in the process. Machine learning will help every recruiter be more like Staff Sergeant McGowan by creating highly-accurate models that all recruiters can use to gain critical insights. 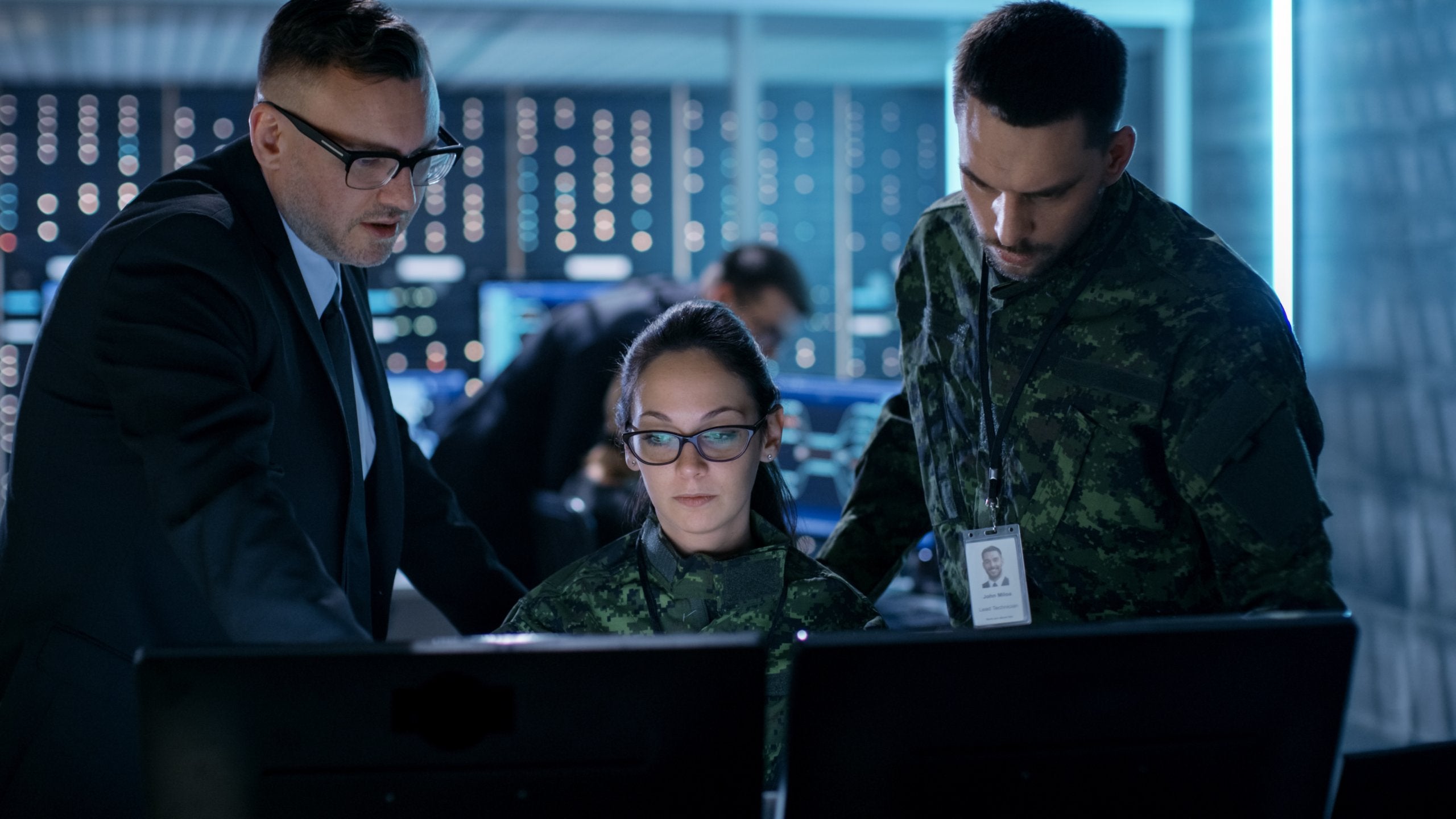 We should also look at the recruiting issue as a marketing problem. One Army report noted that 50% of today’s youth know nothing about the military and cannot name all of the military branches. What would a 1% increase in awareness accomplish? Of all US adults ages 17 to 24, about 10 million of them are eligible to join the armed services, which means that roughly 5 million available recruits may know little to nothing about the military.  A 1% increase in awareness would show 100,000 youths the benefits of military service and, at the very least, give them another option for their careers. Even if 1% of those 100,000 prospects enlisted, we would have 1,000 more qualified recruits in our ranks.

With machine learning, the military can effectively and efficiently overcome the obstacles of finding the best recruits to serve.

How can we accomplish this? By simply utilizing information the military has already collected. The data describing individuals that have expressed interest in the armed services would be plenty to begin training models. There is also data from social media sites which allow the integration of social trends into the AI and analytics efforts. Training our machine learning algorithms with all of this data will enable military recruiters to understand the best ways to interact with prospective, high-quality recruits.

Taking it a step further, we can dig deeper into our data to understand what jobs and interests each prospect may be interested in and put those options in front of them, increasing their propensity to engage and ultimately enlist.

With machine learning, the military can effectively and efficiently overcome the obstacles of finding the best recruits to serve.

Michael Taberski is a non-commissioned officer and Intelligence Analyst in the US Army Reserve. He also functions as an Applied Data Science Associate for DataRobot, focusing on Federal and Public Sector use cases. He enjoys long ruck marches on the beach, CrossFit, and gradient boosted trees.