Scoring More Goals in Football with AI: Predicting the Likelihood of a Goal Based on On-the-Field Events

My Dad is a big football (soccer) fan. When I was growing up, he would take his three daughters to the home games of Maccabi Haifa, the leading football team in the Israeli league. His enthusiasm rubbed off on me, and I continue to be a big football fan to this day (I even learned how to whistle!). I recently went to a Tottenham vs. Leicester City game in London as part of the Premier League, and I’m very much looking forward to the 2022 World Cup.

Football is the most popular sport in the world by a vast margin, with the possible exception of American football in the U.S. Played in teams of 11 players on the field, every team has one objective—to score as many goals as possible and win the game. However, beyond a player’s skill and teamwork, every detail of the game, such as the shot place, body part used, location side, and more, can make or break the outcome of the game.

I love the combination of data science and sports and have been lucky to work on multiple data science projects for DataRobot, including March Mania, McLaren F1 Racing, and advised actual customers in the sports industry. This time, I am excited to apply data science to the football field.

In my project, I try to predict the likelihood of a goal in every event among 10,000 past games (and 900,000 in-game events) and to get insights into what drives goals. I used the DataRobot AI Cloud platform to develop and deploy a machine learning project to make the predictions.

Here is the relative impact:

THE WHAT AND HOW: On a micro level, what is the feature’s effect, and how is this model using this feature?

Feature effects – The effect of changes in the value of each feature on the model’s predictions, while keeping all other features as they were.

From this football model, we can learn interesting insights to help make decisions, or in this case, decisions about what will contribute to scoring a goal.

1. Events from the corner are highly likely to result in scoring a goal, regardless of which corner.

Situation – Ranked in third place, besides the corner if it’s a set piece. That occurs any time there is a restart of play from a foul or the ball going out of play, which provides a better starting position for the event to result in a goal.

2. Events with the foot have a higher chance of resulting in a goal than events from the head. Although most people are right-footed, it looks like football players use both feet pretty equally.

3. Events happening from the box—center, left and right side, and from a close range—have almost equal opportunities for a higher likelihood of a goal.

Time – In the first 10 minutes of the game, the intensity builds up and keeps its momentum going from between 20 minutes into the game and halftime. After halftime, we see another increase, potentially from changes in the team. At the 75-minute mark, we see a drop, which indicates that the team is tired.  This leads to more mistakes and wasting more time on defense in an effort to keep the competitive edge.

The insights from unstructured data

DataRobot supports multimodal modeling, and I can use structured or unstructured data (i.e., text, images). In the football demo, I got a high value from text features and used some of the in-house tools to understand the text.

From text prediction explanation, this example shows an event that occurred during the game and involved two players. The words “box” and “corner” have a positive impact, which is not surprising based on the insights we discovered earlier.

The lifecycle of the model is not over at this step. I deployed this model and needed to see the predictions based on different scenarios. With a click from a deployed model, I created a predictor app to play like gamification—where fans can create different scenarios and see the likelihood of a goal based on a scenario from the model. For example, I created an event scenario in which there was an attempt from the corner using the left foot, along with some additional variables, and I got a 95.8% chance of a goal.

Over 95% is pretty high. Can you do better than that? Play and see.

DataRobot launched this project at Global AI Summit 2022 in Riyadh, aligning with the lead up to the World Cup 2022 in Qatar. At the event, we partnered with SCAI | سكاي. to showcase the application and to let attendees make their own predictions.

Watch the video to see the DataRobot platform in action and to learn how this project was developed on the platform. Or try to develop it by yourself using the data and use case located in DataRobot Pathfinder. Feel free to contact me with any questions! 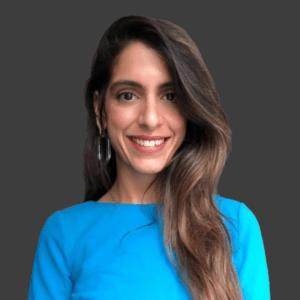 Atalia Horenshtien is a Global Technical Product Advocacy Lead at DataRobot. She plays a vital role as the lead developer of the DataRobot technical market story and works closely with product, marketing, and sales. As a former Customer Facing Data Scientist at DataRobot, Atalia worked with customers in different industries as a trusted advisor on AI, solved complex data science problems, and helped them unlock business value across the organization.

Whether speaking to customers and partners or presenting at industry events, she helps with advocating the DataRobot story and how to adopt AI/ML across the organization using the DataRobot platform. Some of her speaking sessions on different topics like MLOps, Time Series Forecasting, Sports projects, and use cases from various verticals in industry events like AI Summit NY, AI Summit Silicon Valley, Marketing AI Conference (MAICON), and partners events such as Snowflake Summit, Google Next, masterclasses, joint webinars and more.

Atalia holds a Bachelor of Science in industrial engineering and management and two Masters—MBA and Business Analytics.