Just six months after the inaugural DataRobot AI Experience London, the machine learning and artificial intelligence conference returned to the British capital on Wednesday, May 22nd. The event featured a substantially bigger audience, showing just how ascendant AI is for businesses across the globe. With a powerhouse lineup of DataRobot customers and users from Sky, Reckitt Benckiser, 118118Money, and PwC sharing their experience as AI-driven enterprises, the more than 400 attendees were eager to learn the type of business impact that AI could deliver across all industries. 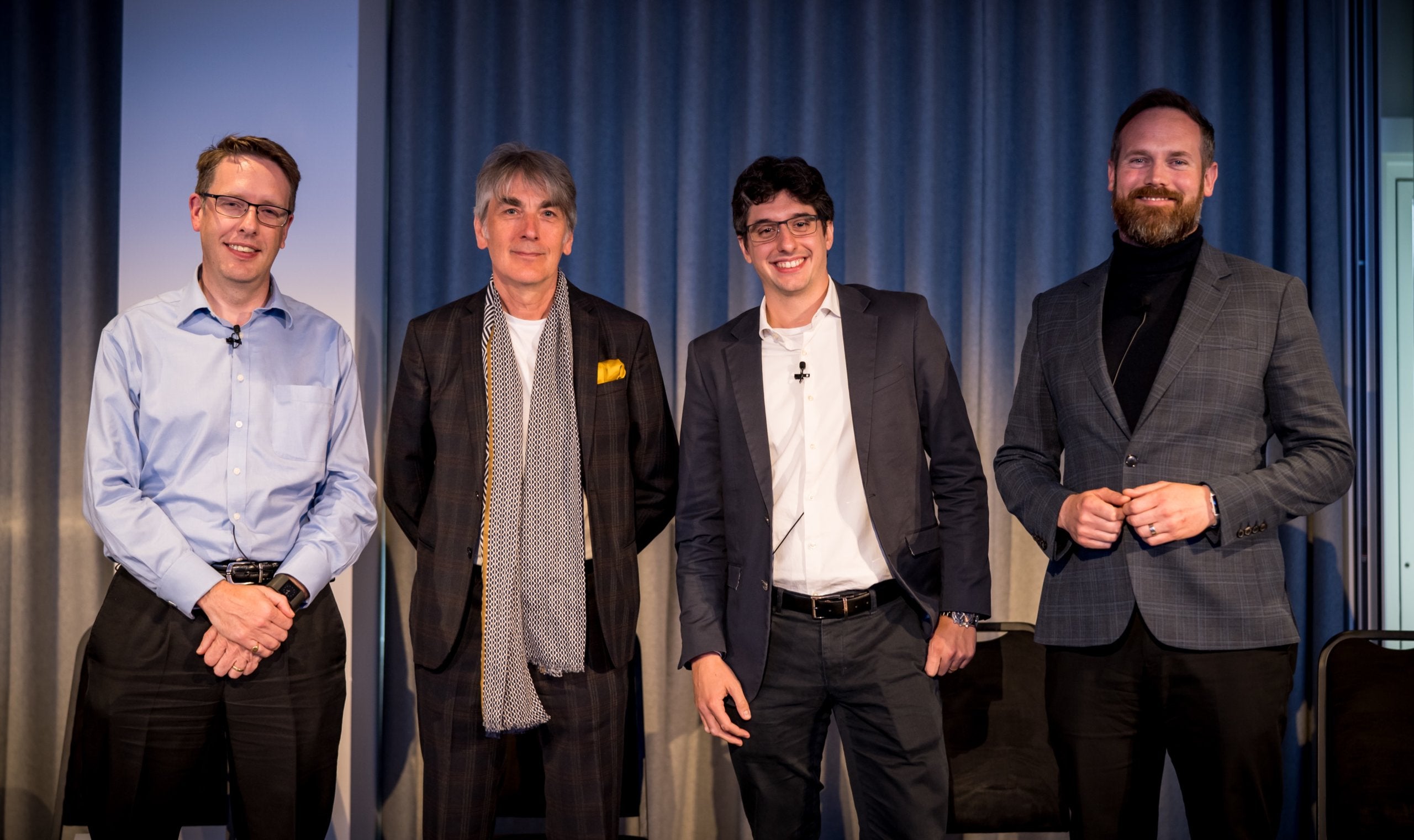 For David Hodgson, the Lead Data Scientist, TV Engineering at Sky, his life’s mission is to lead the fight against “sexy AI,” an epidemic that he sees prevalent at many enterprises who are trying to be more AI-driven.

“Every company has processes they could improve with AI,” said David. “They might not all be sexy, but many of them deliver significant business value.”

At Sky, the UK’s largest pay-TV broadcaster, David is using DataRobot and machine learning on a project that some might consider “boring” but that delivers significant business value. As a media company, Sky TV has tons of content that they have to store. Some of the content gets used a lot (popular shows like Game of Thrones, for example) while others are viewed by customers much less frequently. All that content is stored in and retrieved from the cloud, at various tiers of speed and quality. 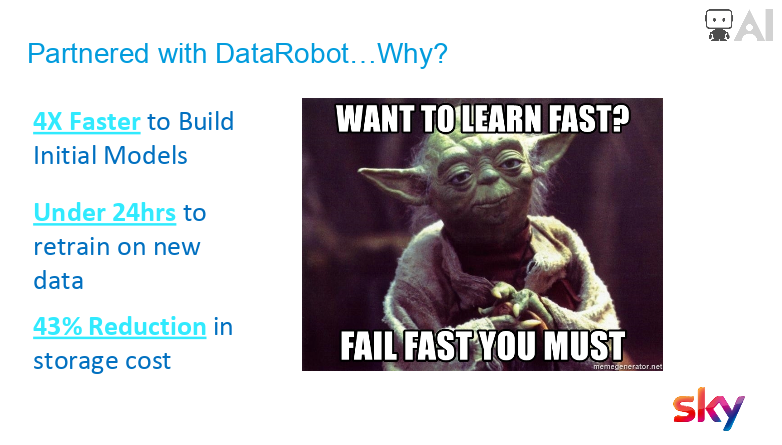 The company has saved hundreds of thousands of pounds in cloud storage costs and projects to save more in the next year of the project, with even more data and better models under their belt. For David, this was the perfect example of “Boring AI” — a project that didn’t necessarily jump off the page in sex appeal but nevertheless had a massive bottom-line business impact.

Reckitt Benckiser (RB) might not be a household name, but it’s certainly a global juggernaut when it comes to household items, producing items from consumer goods brands like Durex, Lysol, Dettol, Airwick, and Airborne. For Renato Piai, as the Head of Data Insights and Analytics, the scope of products the company sells across the global means he and his team have access to enormous amounts of consumer and market data.

The vision for Renato and his team — and the company at large — is to create a business that is always on analytics for RB brands and countries. Renato’s priorities currently include a better understanding of marketing channels and attribution, and getting a better sense of how best to advertise their products on various channels in order to get the most yield and reach.

The problems for RB, as with most organizations trying to get AI-driven, are two-fold:

“We’re not a data science organization,” said Renato. “If we follow the traditional process of hiring and onboarding the data science resources we need, it would take too long to yield results.”

In their search for a platform to help yield results faster, Renato recognized that companies are always looking for a specific paradigm: highest accuracy, fastest delivery, lowest costs, and realizing that there were typically trade-offs to be made between those three elements. Yet, when they started using DataRobot’s automated machine learning platform, Renato found that DataRobot significantly reduced those three trade-offs they had to make.

Since using DataRobot to automated the modeling process, Renato and his team were now operating 26x faster than before, delivering more powerful ROI recommendations on marketing attribution and channel spend to the right business units. For Renato, his three biggest lessons learned since using DataRobot are:

The final customer speaker of the event, Richard Parfitt from 118118Money.com, spoke about the power of AI and machine learning to better serve customers, which should always be the focus of any AI-driven enterprise.

“This industry has used machine learning for decades, but in a much more simplistic way,” said Richard. “We started off with publicly available credit bureau data, but as we got more customers, we got more data which we can use to serve them better.”

But as the company got more data, the demand for data science to unearth new findings and better evaluate customers’ credit risk grew, along with the company’s product offerings. As a startup with limited data science resources, the only solution for Richard and his team was to automate as much as they could. That ultimately led them to DataRobot, and as this graph shows, their journey from initially hand-coding models to automating model creation through DataRobot has vastly improved their time-to-productivity. 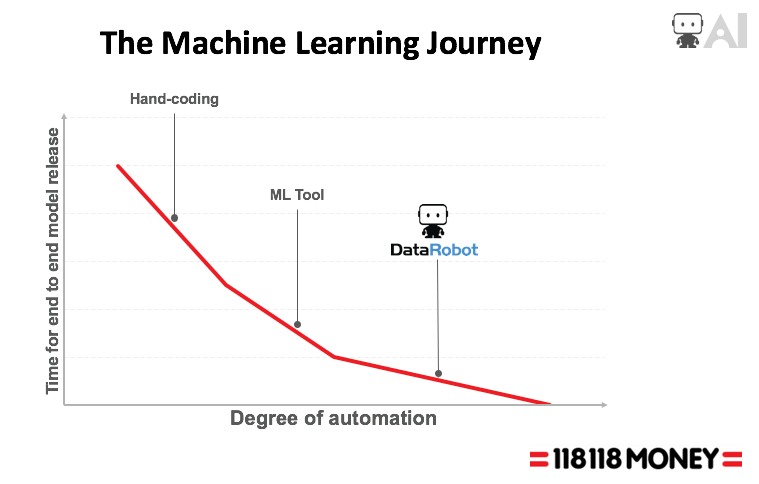 The team has even greater ambitions regarding their AI plans for the future. Richard has visions to continue enabling automated continuous learning models, expanding model documentation, and finding even more use cases with significant business impact, beyond credit risk modeling.

To close out the speaking portion of the event, Rob McCargow, Director of AI at PWC UK (and experienced TedX speaker) took the stage to talk not so much about using DataRobot, but more broadly about the future of AI, or what he called #RobotRules.

Rob, from his experience working and consulting on AI at PWC UK, shared slides about the economic impact of AI, its profound impact across all sectors, and what they’ve found to be the biggest list of factors holding back AI in business. But at the end of the day, AI and tools like DataRobot aren’t here to replace humans or jobs — they’re here to optimize problem-solving and help workers and leaders alike thrive in the Fourth Industrial Revolution.

To wrap up his session, Rob shared a story featuring his own children, who put together an adorable list of what they think should be rules for AI or robots: As all four speakers demonstrate, AI and machine learning are truly valuable to enterprises when they can deliver significant business impact. And all three customers were able to untap the potential of AI when they started using DataRobot on multitudes of use cases. Even the “boring” ones.

Hear more from our speakers and team DataRobot in the video below:

Learn more about the other AI Experience Roadshow events from San Francisco, New York, and Chicago.

What was my main takeaway from this year’s AI Experience Worldwide? Opportunity is everywhere. Opportunity to beat the competition. Opportunity to transform your business. Opportunity to deliver unbelievable ROI.  Three sessions from the event sum it up best: Julian Forero and Katy Haynie from Snowflake delivered a powerhouse case for the new opportunities that the DataRobot and Snowflake integration has…

I was deeply honored to be invited to speak at this year’s AI Experience Worldwide, especially since I got to address a topic that I believe in strongly: the need for trust in AI. I believe we’re at a crossroads, and as AI enters the mainstream, it is imperative that it upholds the public’s trust. We need to create responsible…

What inspired me most about this year’s AI Experience Worldwide conference was seeing firsthand that transformational growth truly is possible. We heard from so many customers about how AI is revolutionizing their businesses.  One key to success is our vision for augmented intelligence, which builds and is dependent on humans creating structure and rules that assert their values, then puts…