The DataRobot AI Experience made its inaugural European stop on Thursday, October 11, welcoming more than 300 AI enthusiasts across industries to downtown London.

Following an opening keynote from DataRobot’s Senior Director Jen Underwood, the audience was treated to an extensive demo of the DataRobot automated machine learning platform, before hearing first-hand from three of DataRobot’s most successful EMEA customers — Liverpool Victoria, Domestic & General, and Markerstudy Insurance. 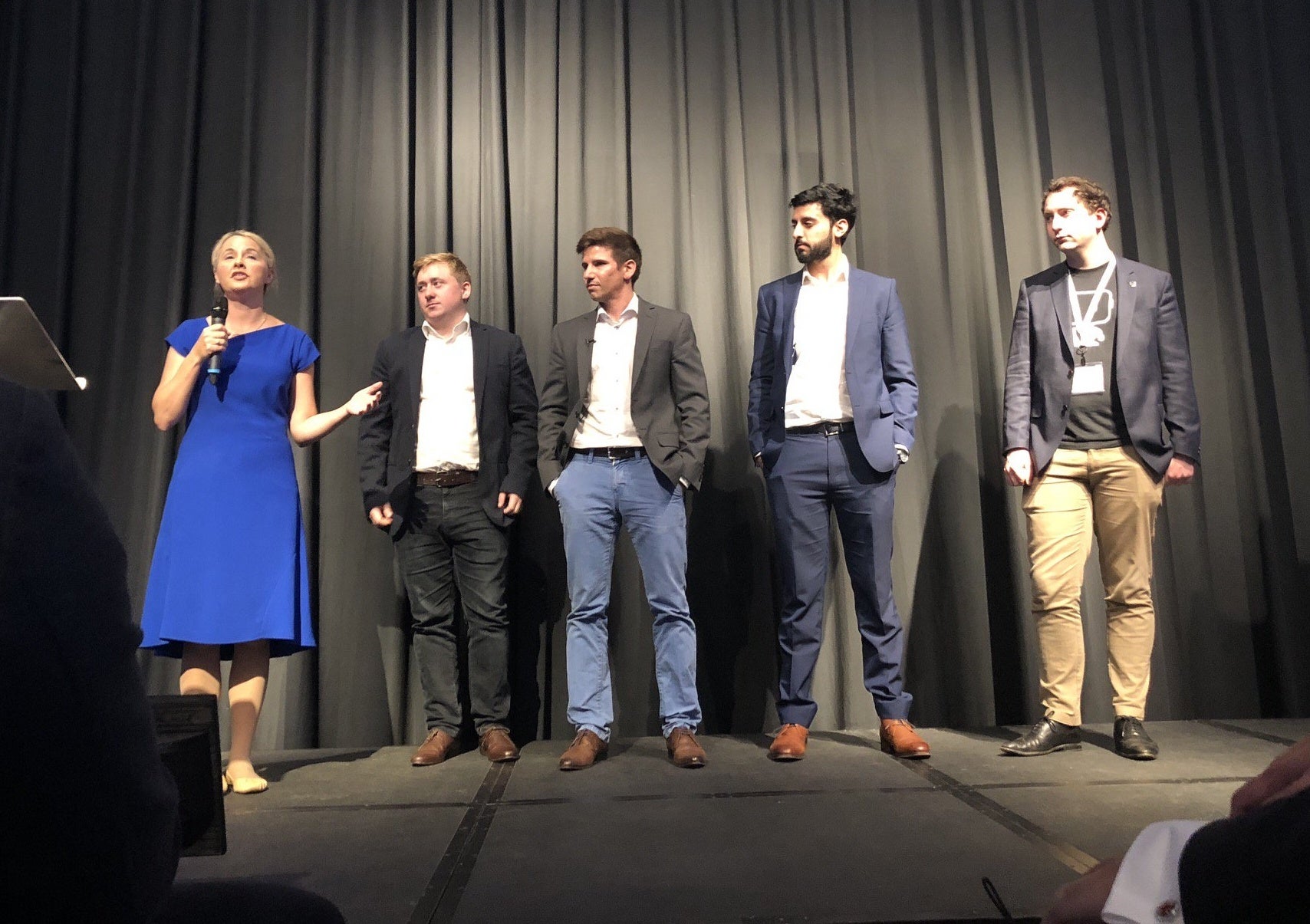 The speakers discussed overcoming challenges – both from executives as well as their existing teams – best practices for implementation, and particularly emphasized the critical role that machine learning plays in the sustained growth of their companies.

Pardeep Bassi, the Head of Data Science at Liverpool Victoria (LV), focused his presentation on his experience “Driving the Implementation of Machine Learning Across a Business,” something he has done at two different businesses. Pardeep was responsible for bringing DataRobot to Domestic & General, before moving over to Liverpool Victoria.

Right off the bat, Pardeep emphasized that machine learning was not only important, but mission-critical.

But implementing a machine learning platform like DataRobot requires more than simply buying a piece of software. Before he brought DataRobot to Liverpool Victoria, Pardeep took a three-step approach:

1. Build your team: And not just a data science or business analysts team of platform users. Pardeep noted that it was important to get layers of support at all levels of the organization that could conceivably be affected by machine learning. Executive support is crucial to get organizational buy-in:

“Our CEO at LV has been great about providing support and opening doors to machine learning,” said Pardeep. “Without that, you won’t succeed.”

Pardeep also mentioned that the “people on the ground are massively important to machine learning success. At LV, all model builders work closely with claims handlers or other subject matter experts (SMEs). According to Pardeep, no matter how smart your data scientists and analysts are, they can never replace the in-depth knowledge of the problem provided by SMEs.

2. Understand the lay of the land: Bringing in an advanced automated machine learning platform can have reverberative effects throughout the organization. For Pardeep, it was important for him to understand the lay of the land before bringing in such an impactful new tool. He shared a common example about understanding systems: While DataRobot allows users to write APIs, do your existing systems accept APIs? Will IT be collaborative and supportive, or a blocker? These were some questions Pardeep answered before bringing DataRobot in.

3. Map a path to success: According to Pardeep it’s not worth bringing in a machine learning platform just to acquiesce to a buzzword. Have a goal or project in mind. Pardeep recommended starting with low-hanging fruit — find decisions where there’s a lot of data and a high number of transactions, and start with those. Even “small use cases” are worth pursuing:

Pardeep ended his session with a call to arms:

“Implementing machine learning is a war, and like any war, you have to build your army, scope the battleground, and choose your battles wisely,” said Pardeep. “In battle, you need to choose the right weapons, and DataRobot is a very strong sword.”

For Domestic & General (D&G), an insurance company with more than 16 million active customers and warranties covering more than 22 million appliances worldwide, being customer-first has always been a priority. However being focused on each individual customer is nigh-impossible…without the help of machine learning.

“The world around us is changing,” said Paul. “We were getting more complaints and we weren’t serving the customers the way we wanted. We have 16 million customers and there’s no way we can be customer-centric without machine learning.”

In his presentation “From Excel to Automated Machine Learning,” Head of Data Science Paul Davies shared what prompted an already analytically-focused company to take the leap to the next step of predictive analytics and data, all in service of providing a better and more personalized experience to their 16 million customers.

Despite resounding success in recent years, D&G knew that generic offers (eg. standard 25% off) and a static pricing strategy would not be sustainable to stay competitive in the longterm. The first machine learning project that Paul and his team undertook was pricing optimization; they wanted to predict at which price points customers would be more likely to renew (You can read more in-depthly about D&G’s pricing optimization project here). After all, as Paul explained:

“Pricing was the first project we did because it’s the easiest way to make money, the easiest lever to show value (of machine learning).”

Before implementing DataRobot — during the “Excel” R and Python days — Paul’s team built models that delivered 10 thousand predictions of price points, ultimately generating an additional two pounds per offer prediction. With DataRobot’s increased speed, productivity, and accuracy of predictions, they are now up to 350 thousand optimal prices per month, at double the uplift (four pounds per offer prediction). That represents an absolutely massive increase in revenue for D&G. 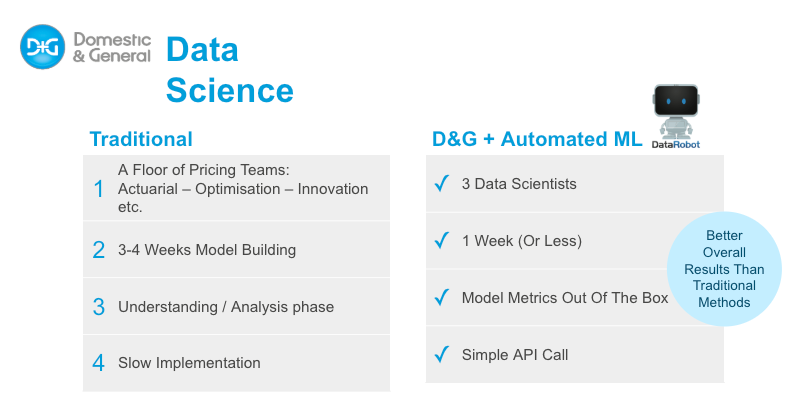 With the pricing optimization project proving to be a  success and showing the value of machine learning, Paul and his team have now cast a wide net for the future of DataRobot at D&G. They have their eye on “loads of other projects” including predicting when machines need repair, handling complaints, tailored marketing messaging, personalized offers, targeted cross-selling, and churn prevention.

Jason Cabral rounded out the customer speaking sessions with his presentation, “Journey of Data Analytics to Machine Learning.” He shared what their experience at Markerstudy, one of the top motor insurance companies in the UK, was like when it came to realizing the importance of data when struggling to find ways to harness that data.

“The data will tell you answers to questions you didn’t even think to ask,” said Jason. “Data and analytics is the only way to achieve that kind of growth in a market that’s probably the most competitive in the world. Data has to be our unique selling point. But we’re at the point of data saturation, and we have so much information: how do we process it quickly?”

Being able to process data and build predictive models quickly was a challenge for Jason’s resource-constrained team. There was a top-down mandate from Markerstudy’s CEO to build out a team of data scientists but, as Jason soon realized, “These were highly soughtafter individuals who might not necessarily want to work in insurance, and were hard to attract and retrain.”

They tried to train a data scientist in-house, who could then work with the insurance subject matter experts on Jason’s team, but that proved to be extremely time-consuming and even more of a black box. Then, through a chance conversation about an IT project with a Markerstudy contractor, Jason discovered DataRobot and the platform’s ability to “do the heavy lifting for you, allowing you to do more with less,” as Jason put it.

Jason’s team of actuaries and insurance subject matter experts could now pursue various projects that were previously too time-consuming and monotonous. These use cases include:

While all three customer speakers represented the insurance industry, they reiterated that there are unlimited possibilities for what companies can do by using data available to them to build predictive models. DataRobot’s automated machine learning platform helped Liverpool Victoria, Domestic & General, and Markerstudy bridge the gap between their in-house subject matter experts and elusive data science resources, allowing them to do more with their data and, as Jason put it, “find answers to questions they didn’t even think to ask.”